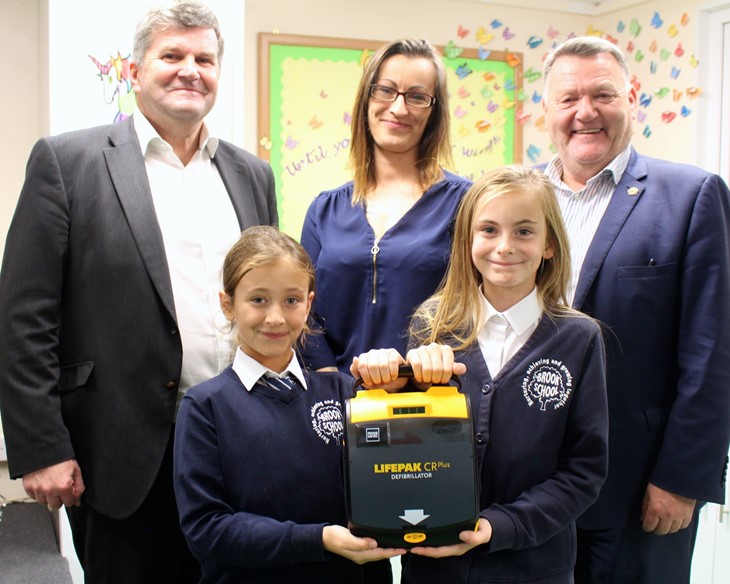 Brook Community Primary is the latest UK school to receive a life-saving defibrillator from The Oliver King Foundation.

The charity has placed 3,200 defibrillators in schools across the country in memory of the 12-year old who died following a cardiac arrest (Sudden Arrhythmic Death Syndrome) in 2011.

HR GO Plc, the national recruitment and business services group based in Ashford, funded the vital piece of equipment for the school after Andrew Watson, a member of the firm’s staff, suffered a similar attack. He thankfully survived but sadly suffers debilitating effects.

Roddy Barrow, HR GO Group Managing Director, said: “We wanted to make a difference after the experience of Andrew, Oliver, and many others. We’re delighted to donate a defibrillator to this school. We hope it will never be used but just in case, it’s here.”

Stephanie Read, mother of Grace, 10, and Erin, nine, pupils at the school, nominated the school for the equipment. She said: “It has so much potential to save life.” Grace added: “I think it’s really great to have this in the school.”

The school is the most remote in the Ashford borough. Chris Green, Head Teacher, said: “It’s really important because there’s been no defibrillator in the village. It would take some time for an ambulance to get here and this defibrillator is for the community. We’re very grateful to Stephanie for putting our name forward and to HR GO for their generosity.”

Oliver’s father Mark set up the Foundation after his son, a talented footballer who was about to sign for Everton, collapsed during a school swimming lesson. There was no defibrillator in the school to give the electric shock that might have saved his life. It took 24 minutes for the ambulance to arrive and tragically that was too long to save Oliver.

Mr King is campaigning for legislation to make defibrillators compulsory in schools and sports centres. He has the cross-party support of around 250 MPs and hopes the law will be passed by 2020-21.

He visited Brook Primary for the presentation and to train teachers how to use the defibrillator. He said: “My inspiration is my Oliver who was just 12, beautiful inside and out. He was energetic, mischievous, a typical 12-year old boy. He’s a massive loss to me, his mum Joanne and our family.

“We lose up to 19 young people to sudden cardiac arrest across the country every week. If there had been a defibrillator at the swimming pool, Oliver would have had a fighting chance of survival. If you don’t use a defibrillator within four minutes, your chances of survival drop by 80 per cent.”

Defibrillators placed by the Foundation in schools and sports centres have already saved 30 lives, he said, adding his appreciation to HR GO for funding the £1,000 device. “They’ve been absolutely unbelievable.”

The Oliver King Foundation was set up in 2012 in memory of Oliver King, who died of sudden cardiac arrest on March 2, 2011.  It raises money to fund a defibrillator ins schools and sports centres. It has so far placed 3,2000 and saved 30 lives. The Department for Education has placed a further 3,000 - but there are 23,000 schools in the UK.

HR GO plc, founded in Dartford, Kent, in 1957, provides recruitment, human resources, and IT services.  HR GO Recruitment places permanent and temporary staff for a wide range of clients across Kent and the UK.  It also has an operation in Wroclaw, Poland. It celebrated its 60th anniversary in 2017 with a 60 Acts of Kindness Campaign that raised £54,000 for good causes nationwide. Headquartered in Ashford, Kent, HR GO employs around 300 permanent staff and places 3,500 temps from 39 offices nationwide.